WASHINGTON, DC – Primary season is in full swing and Congressman Adam Kinzinger (R-IL) is working hard to take on and take out the most toxic partisans running for office. Through his Country First movement, Kinzinger has led the way on engaging with voters to participate in the primaries. With historically low turnout in primary elections, Country First has focused on a grassroots effort to engage with non-traditional voters encouraging them to turn out and vote.

This month, the focus has been on North Carolina and Georgia. Through ads, mailers, text messages, and more, Country First has reached thousands of voters in the districts currently represented by fringe-incumbents Madison Cawthorn (R-NC) and Marjorie Taylor Greene (R-GA). The response so far has been incredible!

The 14th District of Georgia has foot the bill of their representative to the tune of $93,000 for a luxury campaign car and in one year, she spent $20,000 on steakhouses. Is that really what the people of Northern Georgia deserve? She lives lavishly while her constituents feel the real-world impact of inflation. She’s out of touch and out of control. But of course, as always, she’ll somehow play the victim and play on her constituents’ fears to continue lining her pockets and funding her $10,000 hotel expenses. 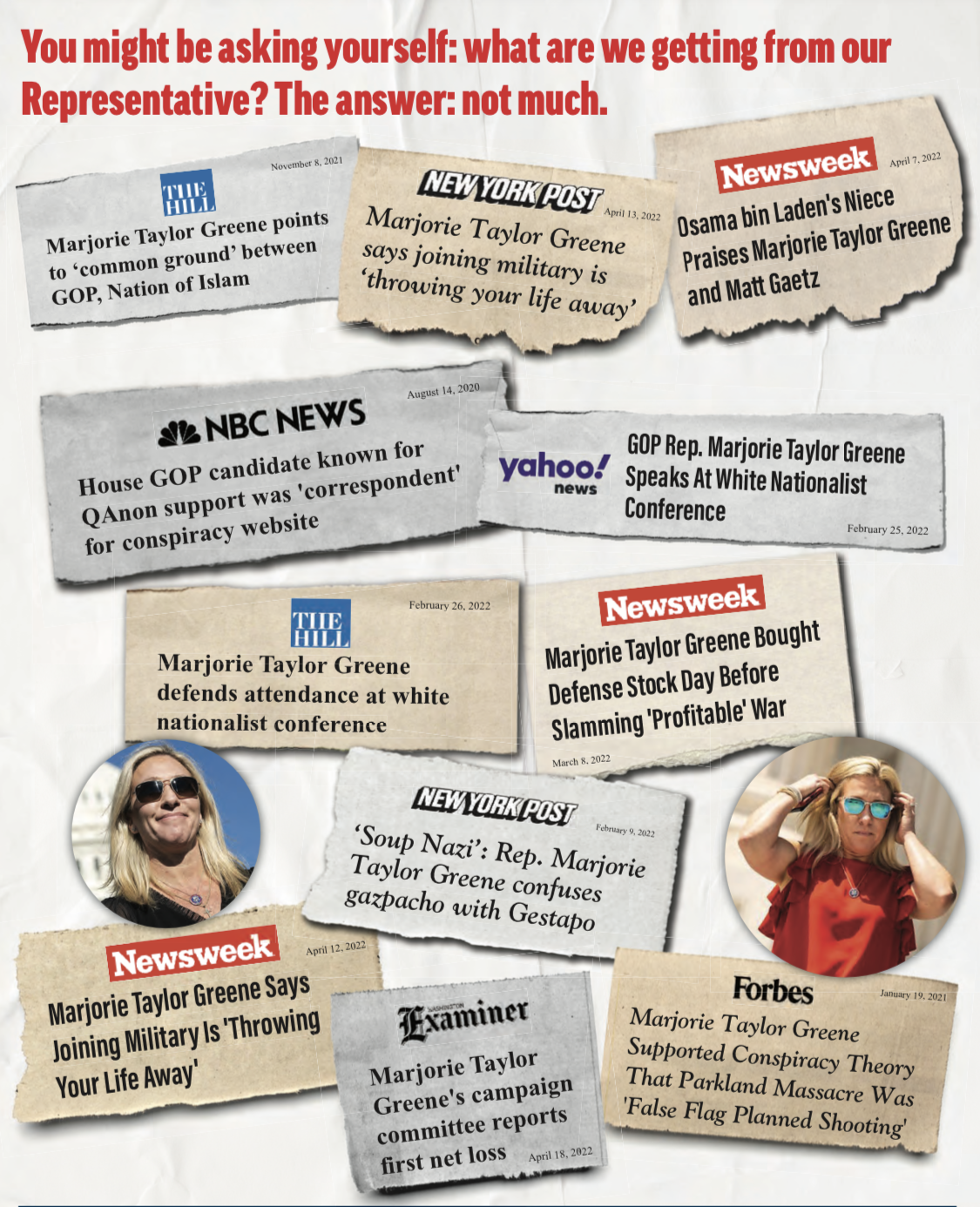 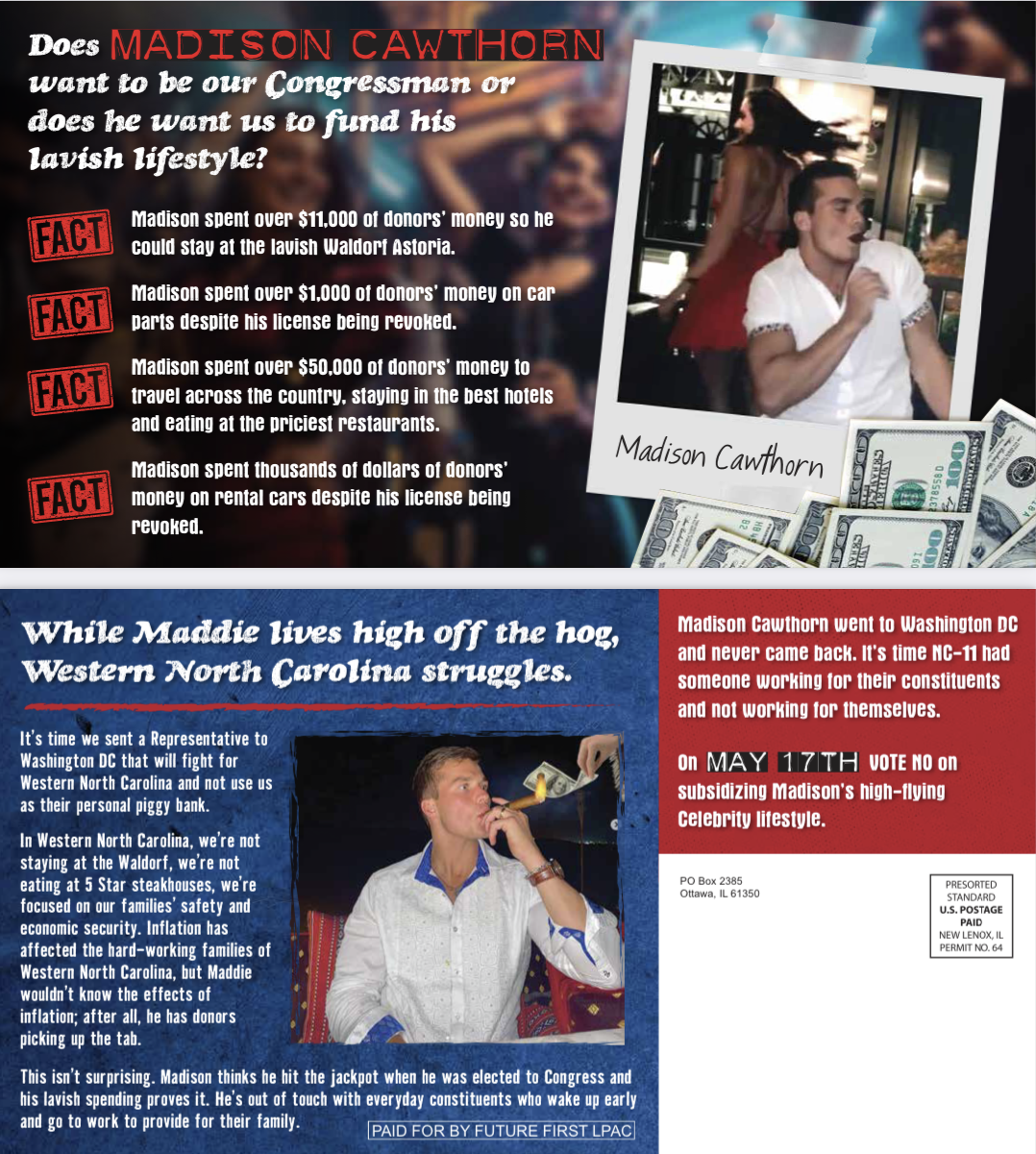 In Western NC, Madison Cawthorn has behaved recklessly time and time again, embarrassing himself, the people he represents, and the institution he’s supposed to be serving. From illegally carrying his weapon into an airport twice and driving with a suspended license again, to the ethics investigations of his spending (among other things…), it’s quite clear that Cawthorn cannot handle the responsibilities that this esteemed position requires.

These are not serious leaders or serious legislators—what have they accomplished for their constituents? Not much. And as a nation, it’s damaging to our institution to have these fame-seekers in Congress who lie to their constituents for their own personal gain. We have to make a change—and that starts by ensuring these two and those like them do not get re-elected. Country First is actively engaged in these races because we’re focused on taking on these polarizing partisans and supporting leaders who tell the truth and put the interests of the country first.”

Tomorrow evening, Congressman Kinzinger will host a virtual Country First watch party for the North Carolina primary election results and give members a look ahead at some of the other races that the movement will target this cycle.

ICYMI: The Congressman recently penned an op-ed on the Primary First plan and the need to break from the toxic tribalism. His piece, "A Political Homeless Shelter," can be found on the Wall Street Journal website here.

Ahead of next week’s Georgia primary, Congressman Kinzinger spoke with the Atlanta Journal Constitution (AJC) about the role his Primary First initiative is playing in the Georgia and North Carolina races specifically, and what he hopes to accomplish moving forward. You can find that interview here in the AJC article titled "Data shows thousands of Democrats voting in GOP primary."

More information on the Country First movement can be found at country1st.com.